Monsterfin 70S is Monsterfin 70S, which is a short casting rod developed to forcibly peel off the deca masa lurking in the shallow 7ft and GT from the root.
The development concept is "hang and stop".

In addition to existing diving pencils, this short rod has been developed for jerking lures and acting sinking pencils.
It is possible to fully cast from a large plug to a 180g sinking pencil, and the rod is short and light so it is easy to jerk the lure.

In addition, the bat power is by far the stronger design than the Laulau83GTS, making it a strong butt section that can withstand a large blue-green run.
Breaking strength is overwhelmingly 35 kg (factory basis).
It is designed to make it easy to undercast in situations where undercasting is required.

This rod is a special short rod developed to control the big plug bluefin tuna game and the shallow flatfish and GT plunge.
Thoroughly pursued operability and lightness when making a lure to act for a long time, cast performance of a large plug, and blank performance that gives pressure to fish.

Even for offshore fishing, the development of the MF70S was that I wanted to jerking or twitching lures, like fishing for bass or seabass, and catching while enjoying the feeling of manual operation.
Most of the offshore rods are in the 8ft range, and because they are long and difficult to handle, they are not suitable for the jerking action of long lures.

The MF70S has a light rod weight and a short length, so you can continue jerking.
Of course, because it is a casting rod to the last, by ensuring the tip section is supple like Laulau 83 GTS in order to ensure casting performance, it is possible to send the lure far away by maximizing the repulsive force of the blanks. is.


The MF70S is not just a rod, but an offshore short rod for attacking fish.
It also has the sharpness that the power input when jerking a large minnow etc. is transmitted directly to the lure.
With this, you can convey the power you entered with a sense of manual, so you can invite as you wish.

As for the reels, the guide uses MN40, so from the viewpoint of flight distance, STELLA 14000 to 18000 are designed to be easy to use.
When catching a large 19.5kg amberjack in a shallow area with a depth of less than 20m, we caught PE10 and STELLA18000 with almost full drag.
In the shallow dolphin pattern of shallow fish and the shallow game of GT, it is not fishing to run, so I think that it is good to have 10 165m at 10th to 14000th.

Even with a drag of 15 kg, you can fight with plenty.
The MF70S may struggle to get the distance until you get used to it.
It is a short length rod and the hardness of the blanks.
In order to gain casting distance, it is necessary to maximize the reaction force of the tip section #1 blank.
If you put the weight of the lure firmly on the blank, you should be able to achieve a flight distance beyond your imagination.

We also recommend using the Monsterfin 70S over the Laulau 83GTS for big freshwater games, mainly in South America.
The reason is that there are many situations of fighting on boats, and because there are many large fish, short rods are easier to fight. 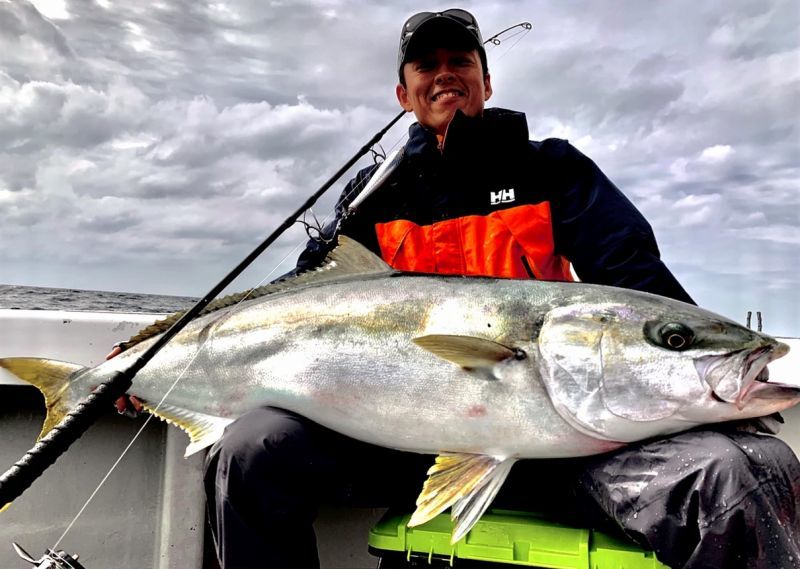