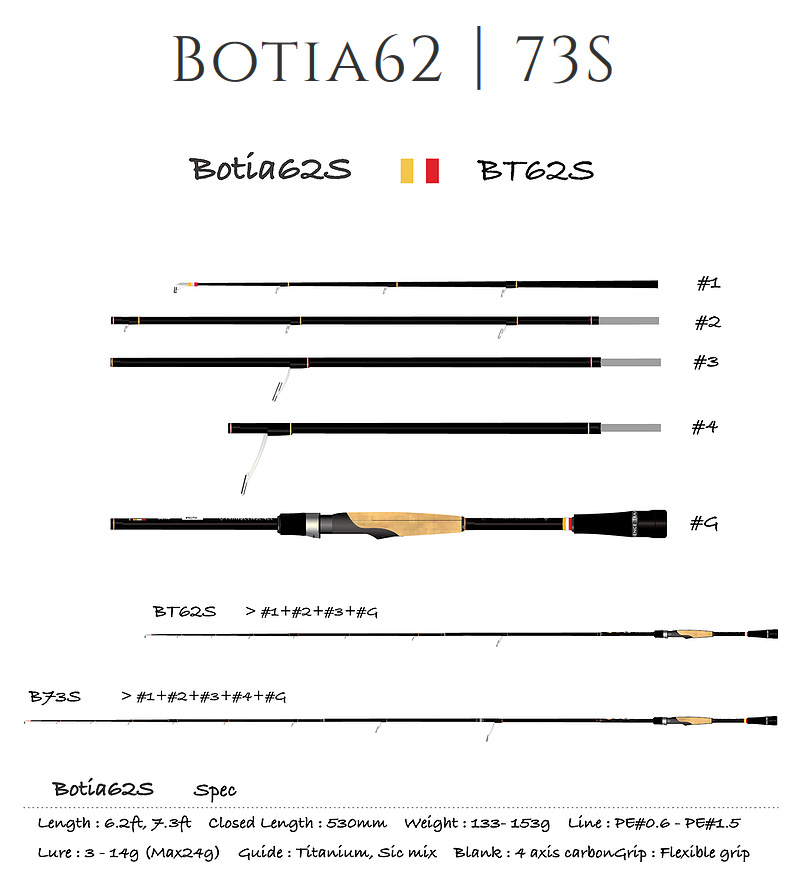 t is the first of the light spinning rod of TRANSCENDENCE Botia62S + (Botia).

BT62S / 73S has started development as an accessory rod overseas.
Overwhelming versatility of the height of the light game being asked to BT62S +.
For not a few to be big hits, such as not assumed in foreign countries, the potential of only Inasu a large fish in any situation has been requested to BT62S +.

A small lure lightly castable tip section | equipped with a # 1, has adopted a hard solid carbon of high elasticity 40 t about this # 1.
As a result, we were able to put out the tension in the blank diameter of the extra fine.
Therefore, not only the short cast of just the tip section is easy, because of the high operability of the lure, to control the lure at will, it will be able to bring to the hooking.

Perhaps you should get to experience the first time that people the BT62S + was taken in hand is the rod of the power band is not the rod of until now.
This is finished in a rod that is other than the # 1 section with a light feeling and the overwhelming distance and sense of security by combining employs a tubular blanks of 40 tons of carbon.

Because it is a light rod is not in the past of TRANSCENDENCE, rather than a rough fight, such as the other rod, Fight while out of the drag will be required.
PE line also be used # 0.6 to # punching a far while using the degree 1.5, and finished with professional preference of the rod is also required delicacy that will also Inashi while asked the fish large.

However, horse mackerel and rockfish in the test, rockfish, black bass from such as grouper, sea bass, Hirasuzuki.
Saratoga Overseas, difficult to hooking such as silver arowana, has been tested in a variety of fish species from the target lightweight lure is required lake trout, up to King Salmon.

Tip is a write-class referred to in the bus, but the bat section there is a strength of about medium class.
You can control the 15g of the lure at will from that for 3g.
Please try once by all means touch in the shop.

6.2Ft of Botia. BT62S of this length is mainly has been a design to the main shaft of light game overseas.
Spinner from a small spoon, a worm, a target that lurk like a predator while using from minnows to small popper invitation, Hikizuridasu.
It is the perfect rod to deploy such fishing from the boat.

And cast the difficult location also there is an obstacle in the other, a place to expand the fishing in the pitching rod to demonstrate the unrivaled strength is BT62S.

* ... Please adjust the balancer weights depending on the reel to be mounted.

7.3Ft of Botia. BT74S of this length is the setting that get to to experience that it is a versatile rod enough to wear if you use.
To understand the Botia, and finished to one where there is a catch can be potential different target if you understand the ability of the drag setting and the line of the reel.

Explanation This is realized versatility, a combination of solid carbon tip and high elastic 4-axis carbon, and by performing the following in solid carbon portion connecting the carbon blank together, you can finish the entire rod muscular was because.
The can come quick guide to the top hotels, while large fish and the fight is to be casting a light lure, is BT62S + So was sired a result of the hybrid various materials.

1 is a present that I want you to experience the essence of multi-piece rod.