The overwhelming performance of the 100% chemically synthesized material enables drag operation that does not disappoint, even at extremely low temperatures, under the blazing sun in mid-summer, or in a downpour of rain.
The slightly viscous grease creates a firm hooking pause, which is important when fishing, and once the fish hits, the minimum amount of drag out keeps the hook under tension, reducing the risk of hook hook breakage.

In contrast to its cute and quirky name, strategic drag grease Shirokuma is a drag grease for experts who are not satisfied with only smooth drags up to now. 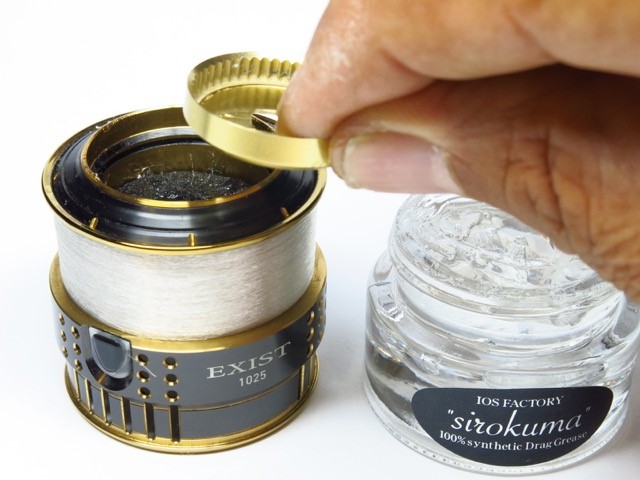 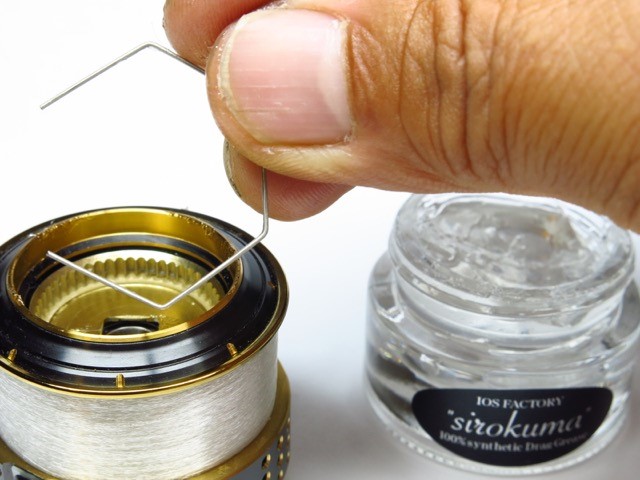 Maintenance of DRAG GREASE Sirokuma is quite easy.
After removing the spool and applying both sides of the drag felt, simply assemble it back together.

Multi washers for medium to large reels should be set on the spool while applying one piece at a time.
(No new application is required except for the drag felt.）

・Spinning Reel
Dedicated to all drag washers (Cannot be used for other parts.)

・Other
It is also ideal as a cleaning grease for wood knobs and has a non-slip effect.


※Please be assured that none of the following ingredients are included.

・Ester oils and additives that easily react chemically with organic solvents that degrade resins and rubbers, and with moisture in the air.
・Medically Recognized as a Carcinogen, Abrasive in Car Gear Oils
・Fluorinated oil that decomposes and transforms at high temperatures, producing toxic gases (e.g., smoking cigarettes with the oil still on your fingers)
・Silicon greases with little or no metal lubricity
・Inexpensive engine oil additive that significantly reduces fluidity in low temperature conditions.
・We do not use any Teflon or other additives that have no chemical basis in the metal friction field.


※IOS grease is made of highly pure chemical ingredients and has almost no odor or unusual smell.

※IOS grease is a super eco-friendly grease that is extremely gentle to both reels and the human body.

Until recently, it was said that smooth was the best drag.

An ideal drag is said to be a good drag that slides out smoothly after a fish is hooked and reduces line breakage.
It is truly an honest, faultless, obedient, good-wife and wise-mother type of druggie!

Some experts have suggested that, ideally, the drag should be smoother when the line is running fast, but when it comes to hooking and landing, it would be better if the line did not slack off so much.。
Certainly, if you are casting a long distance and fully hooked, the hooking will be spoiled if the drag comes out with a "sloooooooooooooooooooooow! The hooking is not so good if the drag comes out.
Often, when they try to land, they run wild and jump and get caught.
Such a trend was evident in Shimano reels, which are well known for their drag.

This is a somewhat contradictory challenge: I want it to be smooth but sticky.
Physically, it is not difficult to increase the viscosity of the grease, but the risk of line breakage increases with light lines due to poor instantaneous response.
In addition, the relationship between the guides of the rod and the line also comes into play.
At the same drag load setting, when the rod is straight and when it is bent like a full moon, the line angle between the guides increases and line resistance becomes significant.
It is just the same principle as when fishing downstream in a river with a soft rod, the same lure has more drag resistance compared to a stiff rod.

In this way, it is also the drag setting that is not straightforward. In those days, it was normal to adjust the strength of the drag as the fish was caught to a certain degree, and the angler would adjust the strength of the drag as they interacted with the fish.
Shirokuma grease was developed to make the drag do more of the work so that anglers can concentrate on fishing.
The name comes from the white color of the protoglyphs.

After repeated testing, the testers preferred the most viscous drag grease, which had the same consistency as gear grease.

Once I used it, I became addicted to it, hooking fish so easily that I was able to handle 50 cm class fish with ease, but at any rate, the drag felt was under severe strain, and after two hours it peeled off in tatters.
However, they still use it as the winning grease for competitions, so it may one day be commercialized.

Well, as it turns out, I have not had a personal crush on the proto grease since then, and I have heard that there are limits to the additives that can be procured, so I am truly sorry, but I have decided to cut ties with the manufacturer of the development.

We had to start from scratch again, but one grease caught our eye after ordering samples from a manufacturer that had helped us with gear grease in the past and from other oil manufacturers.
It is also stable enough to run with 60cm class rainbows instantly, of course.
Perhaps this is not the smooth drag that is commonly referred to, but rather a variable, living, raw grease.
In plain English, it is the drag grease of a bad boy.

However, this characteristic is said to be so addictive once used that it is hard to let go.
I remember taking this grease to Big Fight Matsumoto in Hokkaido for a final test.
Water intrusion is one of the factors that degrade the performance of the grease, but it is difficult to completely waterproof the drag unit, so it was necessary to provide adequate performance even if some water gets in.

I immediately tested the grease in a muddy stream for a day at a managed fishing spot where there was a heavy rain warning on purpose.
The reel was completely submerged and damaged, but the drag was stable.
The color is white, or almost transparent, high-purity 100% synthetic grease.
Shirokuma grease is also effective on stock drag units, and on Shimano type reels, it changes the drag characteristics 180 degrees to the liking of the connoisseur.

Furthermore, in the case of Daiwa, the synergistic effect with the D system is truly a fish out of water.
When fishing at the bottom, the initial hooking is decided by a light flip; when fishing at the surface with a long cast, the hooking is decided automatically, and the D-system responds to the ferocious running of the steelhead in a responsive and linear manner.
This is a new concept that transcends the past concept of drags, in that drags not only prevent line breakage, but also provide high response and constant tension linearly to the fish, thereby reducing the chance of being caught.

Since the topic had already progressed to Shirokuma, please forgive me for naming it Shirokuma Grease, as the white bear is in a world of snow and ice.